Heroes of The Storm Guide: How to Get Gold Fast

Every so often you will see somebody in the forums complaining about bankcruptsy and they don’t have enough gold to buy every new hero upon its release. Well I can tell you that it is possible to make more than enough gold to buy every new hero as soon as it’s released. All it takes is a little time management. Here Boostingvip.com shares with you some tips on how to earn a decent amount of gold in Heroes of The Storm. 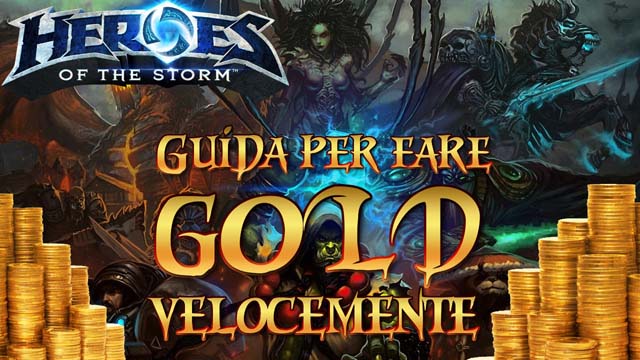 Level your account to level 40 and in doing so you will have gained an extra 14,000 gold.

Do The Daily Quests - keep 2 of the "play two games as (Franchise) heroes" quests undone, as this increases the chances to get the more lucrative quests that give you 600 or even 800 gold.

Buy a Stim Pack. A stim pack will increase your gold from Game rewards by 150% that means you will get 25 gold for a game against the AI, 45 gold for a PVP game defeat, and 75 gold for a PVP win. You get more out of them if you have lots of heroes that are still below level 9. That way, not only will you get the extra gold, but the extra XP will mean you level those heroes faster, meaning you get the level-up bonuses (500 for level 5, 750 for level 9) earlier.

Do quests. This is the easiest and most reliable way to get gold, so make sure to do your quests! When you do daily quests, keep 2 of the "play two games as (Franchise) heroes" quests undone, as this increases the chances to get the more lucrative quests that give you 600 or even 800 gold.

Advanced tip: Some quests give more gold than others, and you can optimize it so that you get the best-paying quests more regularly. If you play multiple games a day, the best one to get is the "play 8 games" one which nets you 800 gold - second best is the "win 3 games" one which gets you 600 gold IIRC.

Unfortunately, its totally random which quests you can get. However, you can game the system a bit by "loading" your quest log with two smaller 200g quests which you will intentionally avoid doing, so that you have a higher chance of getting the bigger payout ones (since you can't get duplicate quests).

This only works if you play every day (so you don't miss the opportunity for getting a quest since your quest log will be full) and only if you can finish the bigger quests each day you get them. But it helps if you can pull this off!

Play (and win) non-AI games. AI games give you 10g if you win and nothing if you lose I believe - QM/UR/TL/HL will give you 20g if you lose and 30g if you win. Granted, you can grind games against beginner AI and win them in <5 minutes and potentially farm gold faster than if you were to play competitively) but you will go crazy out of boredom if you do that for too long.

Play in large groups. You get more experience and more gold in large groups the the extra xp you helps level the hero up for 500G for every 5 levels of your hero. You get 50% more gold for 5 man groups and an addition 100% if you play Team League, Also make sure you Friend one of your group you get an extra 25% if you have at least 1 friend in your group.

Do the tutorial if you haven't done it - I believe that will net you 1000g right there.

That’s then end of this guide. If you follow the advice above, you should be able to get Leoric in a week or two of regular play. If you don’t have enough time to play the game and earn money, you can visit and buy Cheap Heroes of The Storm Boost at Boostingvip.com, a professional online game boost store.