Blizzard has unveiled Hearthstone’s next expansion, Saviors of Uldum. The expansion will follow the League of Explorers as they look to intercept the League of EVIL in its tracks and will launch on Aug. 6. 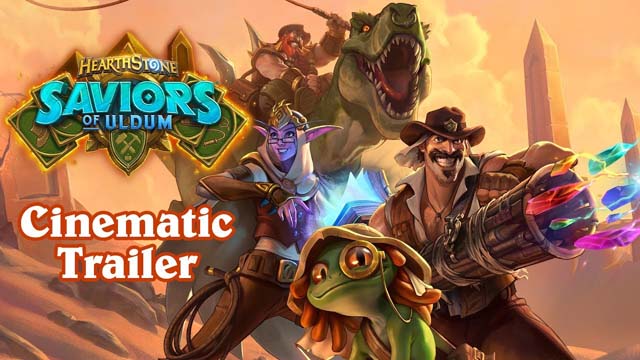 League Of Explorers will be the second chapter in Blizzard’s planned year-long story arc. As with Rise Of Shadows, it’ll just be a card release at first, with a (likely paid) solo adventure coming in September. It also bringing back Quests, a kind of card that gives players a task and a special reward for completing it.

Saviors of Uldum will include 135 new cards. Uldum was introduced in World of Warcraft: Cataclysm, and is an Egyptian-themed zone that hides Titan constructions beneath its sands. Uldum is under attack by the League of EVIL and the stolen, magical city of Dalaran. Hence, the titular saviors of Uldum are tasked with stopping the League from stealing powerful Titan technology.

New Keyword – Reborn. The new keyword players will need to know is “reborn.”that sees minions come back to life the first time they’re destroyed, but with only one health.
New Theme – Plague. Five of the game’s nine classes — Rogue, Warrior, Warlock, Shaman, and Priest — are also getting Plague cards. These are expensive spells that will impact every minion on the board.
Quest Cards Are Back! A new set of quest cards is also coming to Saviors of Uldum that can be played upon a hero’s first turn. Quest cards, which were originally created in Journey to Un’Goro, have all rotated out of Standard recently. But we’ve got a completely new batch of Quests (again, one per class). For those unfamiliar with how Quests work, here’s a quick explanation: They are 1 mana Legendary spells that always start in your opening hand (but you can mulligan them away). Each of them requires you to do a certain task after you play them, and once you complete it, you get a reward. Very simple! In case of Un’Goro Quests, you had to play the reward yourself, but Saviors of Uldum Quests seem to upgrade your Hero Power immediately (at least the two we’ve seen so far).

Saviors of Uldum will also have additional Solo content, but we don’t have any information about it yet.

There are two Pre-Purchase tiers. The 50-pack bundle comes with a Legendary card and a special card back. It retails for $49.99. The 80-pack Mega Bundle runs $79.99 and includes the same features as well as the Elise Starseeker Druid Hero.

More details will be released on Saviors of Uldum in the weeks to come, including on its story based solo adventure, which is set to unlock in September. So stay tuned to Boostingvip.com, a professional EOL store providing Cheap Hearthstone Boosting.

Jjonak's Overwatch League 2018 MVP Zenyatta Skin is Available Now and How to Get It
Call of Duty:Modern Warfare Will Get a Massive Battle Royale Mode