Players in the Overwatch League have signature characters. Carpe is an amazing Widowmaker, for instance. While most players are celebrated within their fanbase, and not so much by League fans as a whole, arguably no player is better known than New York Excelsior’s JJoNak.

JJoNak was voted 2018 League MVP by the fans, even though Excelsior did not walk away as the Inaugural Season champs, and it’s easy to see why. During the inaugural season, he almost single-handedly took the New York Excelsior all the way to the top of the standings with his astonishing Zenyatta play. As a result, the South Korean flex support ended up achieving the inaugural season MVP accolade.

To celebrate his achievement, Blizzard designed Jjonak his very own Zenyatta skin and were nice enough to give the rest of us the chance to get our hands on it as well. 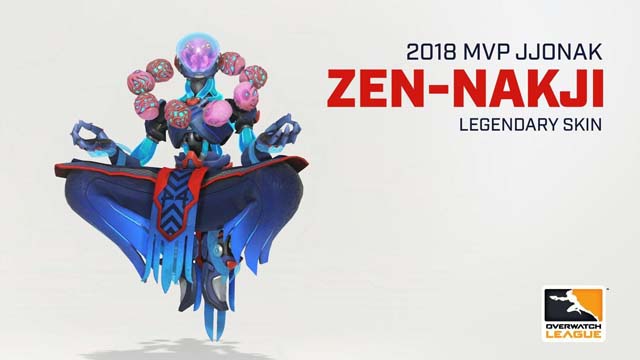 The MVP Zenyatta skin is based on the pro’s love for octopuses, JJonak stands for “jjomullak najki,” or “fumbling octopus” and he even has one tattooed on his arm. As you can see in the image above, the special skin features a large pink octopus as Zenyatta’s head in JJoNak’s favorite color, pink. Zenyatta’s orbs have been transformed into tiny, wiggling octopuses that turn gold if players equip the healer’s golden weapon. Zenyatta is outfitted in New York Excelsior colors and a very stylish pair of shoes, like JJoNak tends to appreciate.

How do we get the new skin?

The skin will go live on June 27 and will stay available to purchase until July 14, a few days after Stage 3 of the 2019 OWL Season comes to a close. Its status will be Legendary, which will make it even more special for those who actually get to obtain it. Zen-Nakji, as it is called, will cost 200 tokens. Tokens can be earned through watching Overwatch League games live on Twitch—fans can earn three per hour. One hundred tokens can also be purchased for $4.99 within the Overwatch client. If you don't have enough time for earning tokens, come to Boostingvip.com for Cheap Overwatch Boosting. The skin can be unlocked by going to the Overwatch League menu in game and selecting the grey OWL tab, where it can be found right next to the Lucio Dance Party emote.Jjonak has now become the first player in the history of Overwatch to have a skin expressly designed for himself.