All of Azeroth’s most infamous foes are teaming up for this exciting, new Hearthstone expansion called Rise of Shadows which released in April 10th, 2019. With the expansion comes 135 all-new cards players get all witchy and crafty and ne’er-do-well with new Scheme cards and 1/1 Minion spawners as well as potently empowering battle-cries. Players will be able to play within the faction of The League of E.V.I.L. led by arch-villain Rafaam and until July 9, 2019, every player who logs into Hearthstone will receive a free Archmage Vargoth minion card. 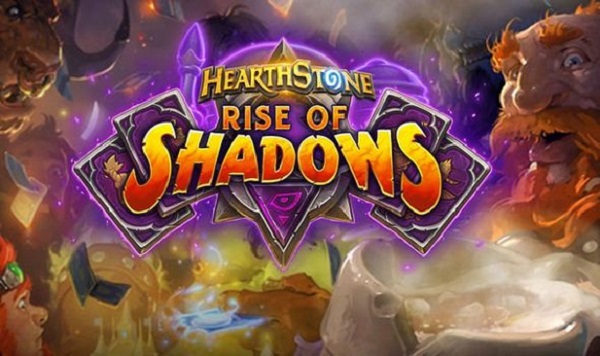 The League of E.V.I.L. will have a formidable opponent, though, as the Defenders of Dalaran will not go down without a fight. With the addition of Twinspells, they can now generate a copy of themselves into their player’s hand to issue some ultimate smackdowns against the baddies.

Hearthstone’s Archmage Vargoth card has its own set of unpredictable and powerful mayhem attached. The legendary minion will recast a friendly spell at the end of the player’s turn to random friendly targets, buffing them against their opponent. Starting today, all players will be able to complete a series of limited time quests that will issue 12 card packs that include 5 Rise of Shadows packs to grow their collection. From April 9th through April 16th, players will be able to purchase the Shadow Bundle which includes 9 booster shadow packs for $9.99 (both Canadian and US).

J. Allen Brack, president of Blizzard Entertainment, issued a statement about upcoming Hearthstone content and storylines for the year: “This expansion also marks the beginning of a brand-new year of Hearthstone content—the Year of the Dragon—and we have a lot more in store for players in 2019.”

With so much in store for Hearthstone this year, Rise of Shadows marks the start of some incredible storyline content to come, starting in May with a skullduggery adventure storyline in the works. This is being billed as the most ambitious story yet and consists of 5 chapters of content for the solo player experience.

Hearthstone Rise of Shadows is available to all players for PC, Mac, Android, and IOS devices. As always, Hearthstone is free to play, but booster packs can be purchased to enhance player experience. If you want to get ranked fast in new Hearthstone expansion, just come to boostingvip.com, here your’ll get Cheap Hearthstone Boosting. Our professional boosters will make you satisfied.

Pro Tips on Farming XP And Leveling Up Quickly In Rocket League
PUBG Guide: How To Improve Your Aim And Get More Chicken Dinners