To give Destiny players a first peek at what's happening for September 2019, Bungie is planing to have livestream on June 6 which will reveal what it’s calling “the next chapter” for Destiny 2. 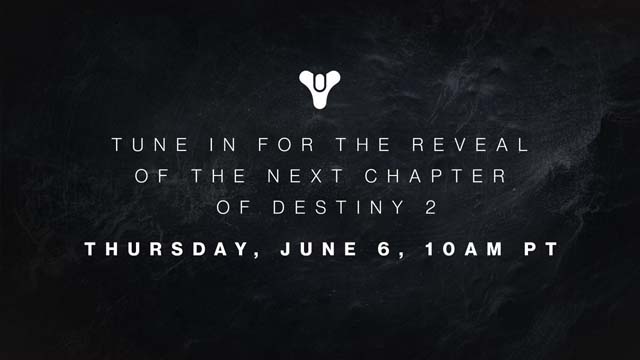 
As you can see in the image above, all will be revealed June 6 at 10am PT, 1pm ET, 6pm UK, 7pm CEST, though no other details were announced. The image used behind the text is dark and hard to discern, and appears to largely consist of white smoke.

This is a big one. It's always a big one, because this game has a habit of making big shifts on a yearly basis. Around the same time last year, a similar reveal was done for Destiny’s year 2  which brought with it the reveal of the Forsaken annual pass.

But this one is bigger for both Bungie and Destiny as a whole. If you’ll recall, Bungie split from publisher Activision near the beginning of the year, taking the rights to Destiny in the process. Since then, it's been carrying on with the game’s seasonal updates -- which were planned well before the breakup -- but with the end of that stuff on the horizon, the studio’s clearly ready to spill the beans on what’s next.

There’s no telling what it will entail, really, but Bungie will definitely want to put an exclamation point on this one as a way of re-announcing this game to the world. We can expect big changes, maybe even system-level ones like the ability to migrate characters.

Meanwhile, Destiny 2 Season of Opulence will go live at?1 p.m. EDT June 4. However the transition process begins at 10 a.m. EDT when maintenance starts, and servers will be taken offline at 11 a.m. EDT. Once servers are offline, the 2.50.1 update will begin rolling out to all platforms.

Here’s a breakdown of new features of Destiny 2:

1.Menagerie: A new activity that involves collecting Runes from daily activities. These Runes can be slotted into your Chalice of Opulence and taken into the Menagerie. The reward you earn depends on the Runes you've selected. This allows you to essentially choose the powerful rewards you get, but it will be the job of Guardians to figure out which Rune combinations yield which results. Bosses and new rewards will be added throughout the season
Crown of Sorrow: The new 700 Power raid goes live June 4 at the start of the Season.
2.A Truth quest
3.A Lumia Exotic quest
4.One free Exotic quest
5.The Solstice of Heroes event
6.New Pinnacle Weapons: Vanguard—Wendigo-GL3, Crucible—Revoker and Gambit—Hush.

For more news, guides and Cheap The Destiny 2 Boost on Destiny 2, visit Boostingvip.com.

Preview at Hearthstone Rise of the Mechs Event, starting June 3
Tips and Tricks for Getting Better at Fortnite Season 9